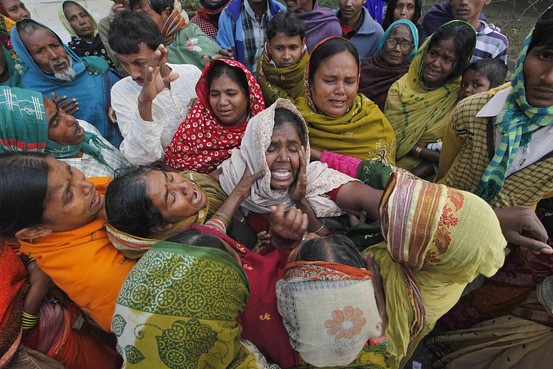 What They Said: Kolkata Tragedies

West Bengal has been hit by two tragedies in recent days. A fire at a hospital in Kolkata left at least 89 people dead and then at least 162 people died after drinking a toxic batch of liquor sold in a district south of the state capital.

India Real Time presents a roundup of what the newspapers had to say about the disasters.

In a Friday editorial focused on the illegal liquor deaths, The Hindu said the tragedy “lends credence to thinking among political parties and state governments that it might be better to introduce legal sale of licensed liquor than let addicts go for the illicit stuff.”?

It said a solution could be based on the model used in Tamil Nadu, where the state government monopolizes the liquor trade. This system brings in revenue that can be used on welfare schemes, the editorial notes. It also dismissed prohibition, as “it just doesn’t work; in fact, it brings on all sorts of ill effects, social as well as medical.”?

“Alcoholism is a social menace that needs to be tackled in a sensitive, intelligent, multi-pronged way. Driving it underground, to dangerous devices, is clearly not the way,”? it added.

It added that the toxic alcohol, which was priced at 7-20 rupees, was sold “virtually opposite a police post in the area,”? according to preliminary reports.

“For Mamata Banerjee, the honeymoon is over”? was the headline chosen by the Daily News and Analysis for its Friday editorial. It said both incidents, which happened seven months after West Bengal Chief Minister Mamata Banerjee came to power, could have been avoided.

“Banerjee, who has been seeking a special financial package from the Centre for Bengal, would do well to remember that more than funds, it is the attitude and work ethic of government staff that is important to ensure the safety and welfare of people,”? it said, adding “Unfortunately for Bengal, only the party in power seems to have changed, not the mindset of the people in government.”?

“To put it plainly, the honeymoon period for Banerjee’s administration is over. She has to start tackling the hard realities and address the lacunae in administration. She must remember that she can’t blame the Left anymore.”?

In an editorial on Monday, the Times of India said Kolkata’s hospital fire “could have been easily averted.”?

“That all the deaths were due to suffocation points to the absolute unpreparedness of the hospital staff. Despite an annual turnover of over 180 crore (1.8 billion) rupees, AMRI appears to have flouted every fire safety rule in the book. There were no evacuation plans, no alternative exits in the seven-storey building, no proper arrangement to provide access to fire tenders, fire alarms and smoke detectors malfunctioned and water hydrants simply didn’t work.”?

“Worse still, the hospital had another fire in 2008, but failed to learn its lessons,”? it added.

The editorial said it was “despicable”? that the hospital hadn’t cleared inflammable and radioactive material out of its basement “? where the fire started “? despite being given a three month deadline to do so by the fire department in July.

“But there was no follow-up. That the state government has a 1.99% stake in AMRI and two nominees on the hospital board with the director of medical education as its chairperson cannot be overlooked. Is that the reason the government failed in ensuring that safety norms were up to scratch?”? it asked.

The paper then rounded on India’s cities overall: “There is, as a matter of fact, a pathetic lack of disaster preparedness and safety consciousness across the board in India’s metropolitan centres.”?

“Most of our metropolitan cities sit on sensitive seismic zones. Yet, seldom are building codes congruent with earthquake safety protocols,”? it added.

In a Saturday editorial, the Indian Express called Kolkata “a textbook case of urban mess,”? as it was built “without any anticipation of civic needs, or in complete disregard of the same.”?

Like the Times of India on Monday, the editorial added that India is poorly prepared as a whole. “Every city may not be as relatively under-invested in urban services as Kolkata, but large-scale fire hazards are not confined in time and space.”?

“India needs to dismantle antiquated regulations and embark on upgrade or overhaul of city infrastructure as the need may be.”?